Training Your Retriever for Double Duty

If you own a waterfowl dog, chances are that sooner or later you’re going to ask it to perform upland duty. It might be a pheasant hunt as a sideline to your Dakota duck hunt, or maybe an afternoon of quail hunting after a morning goose hunt. Most retrievers handle their second job pretty well. You can help your dog perform that job even better.

Hunting a field in search of scent is a lot like retrieving; it’s a natural instinct. Your job is to awaken those instincts and control the actions of Pup until you see him responding.

Training Pup to quarter can and should begin as soon as you bring your future star home from the breeder. Long daily walks will present him with many new smells, sounds, sights and adventures. Pup will want to go exploring, but it’s unlikely he’ll range too far from you. As pup is bounding around in front of you, start communicating to him that you like his actions with a happy “Hunt ‘em up!”

While Pup is running through the fields as happy as if he had two tails, your initial job is to follow him. Pup must learn that his place is in front of you. If he decides to run behind you, turn and follow so he’s always in front of you. I’ve seen older dogs
struggle with this concept. They thought the safe place for them was at heel. With patience, they all came around to become good upland hunters. As young dogs, their hunting instinct was never nurtured. Avoid this by starting early.

As pups grow older, they tend to become more independent. One day he might decide to venture off on his own. Pup is bold now and ready to challenge your authority, so be prepared. Hopefully, you have already started some obedience training, and pup understands the “Here” command so you can call him back each time he ventures too far. With enough repetition, pup will learn how far he’s allowed to stray. This distance is determined by how well you shoot and what type of birds you are hunting.

I also encourage you to use your whistle at this time. Give a tweet on the whistle each time he ventures too far and before you know it, Pup will be turning on his own when he reaches that distance. Now we’re getting somewhere – Pup is happy while hunting, but under control.

I’m a big believer in buying the best pup you can and letting his natural genetic encoding tell him where to hunt. However, there are times when you need to cast Pup into a specific area that you think or know holds birds. To do this, Pup must learn hand signals. Unlike blind retrieves, casting in the upland hunt is not a precise exercise, but a steering of Pup into a general area.

A dog will easily learn to cast in an upland hunt if he will come when called. Start by commanding pup to “Hunt ‘em up.” He goes out in one direction, you veer off in the other. As he is about to turn on his own, give tweet on the whistle, causing him to turn and come toward you. When Pup looks up at you, hold out your arm, pointing in the direction you’re heading. Start walking a zig-zag pattern through the field on your daily treks. If pup zigs, you zag and if he zags, you zig. Each time he turns, either on his own or after you call him, hold out the correct arm and cast him in a new direction. With enough repetition and conditioning, Pup will cast in any direction.

What if Pup decides he would rather run around the cover instead of punching into it and hunting? We need to show him that the cover is a good place and not something of which to be afraid. Do this by walking into the cover and call him in there with you. If he likes you and will come when called, this shouldn’t be difficult. After he enters the cover, encourage him to hunt in an upbeat tone. When Pup finds enough birds in the cover, you’ll have a hard time keeping him out of there.

What if he shows little interest in the field and is lethargic in his hunt? Try spicing up the field with a few birds, either freshly killed or live flyers. Hopefully, this will jolt Pup’s interest. Spread the birds out on both sides of the field to encourage Pup to hunt the sides. Walk down the middle while pup hunts the sides and retrieves the planted birds. Make a big fuss over him each time he finds a bird, and then cast him off to hunt again.

Introducing Your Retriever to Upland Hunting

One of the most common questions I’m asked when I’m doing training demonstrations for SportDOG is this one: “How do I keep my retriever hunting in range?” Without a doubt, keeping your dog from...

There’s nothing better than a hard-charging flushing dog that is absolutely crazy for birds. But how do you make sure your young retriever will turn out like that? Here are the steps I use. 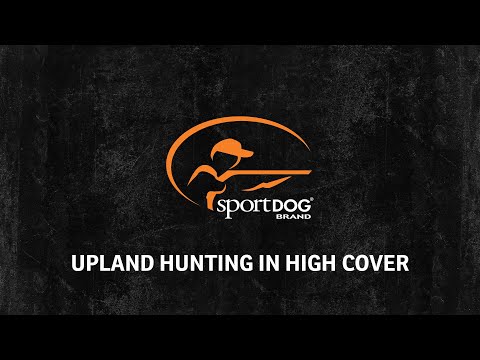