Why One Hunting Dog Isn't Enough

Do you ever stop and look around your house, and think, "man, I have a lot of dogs?" It's OK. Upland hunters and waterfowlers are always acquiring more. We need more shotguns, more shells to pump through them, more floating decoys, more field decoys. Boats, motors, leases, land access … more, more, more. So, it shouldn't be surprising that when we buy one gun dog, we soon covet another. The worst thing that can happen to a hunter's pocket book is to have a pointer or retriever that turns out to be an absolute stud, because then, of course, we have to buy another. With that in mind, we asked some of the most dog-crazed hunters and trainers we know why, exactly, they keep acquiring dogs.

Drew Palmer is a former college pitcher turned waterfowl media man and Kansas duck guide. The ex-fireballer has a four-year-old black Lab-his main bird dog-and, just picked up a 10-week-old German wirehair pointer he can barely let in the door at his parents' house for fear she will eat everything in sight.

"The best thing about watching a young dog grow is seeing them pick up new skills every time they're in the field," says Palmer. "They're just like athletes … some days they're great and some days they're not. But, seeing them work and have the desire to hunt hard is very cool to see. It adds another dynamic to any hunt that I go on, watching them do what they love."

You probably know the name Tom Dokken. The famed trainer, who splits his time between South Dakota and Minnesota, has had a few pups in his day. You won't find a more dedicated dog man. Tom loves his dogs so much that even when they pass on, he cremates them and puts the ashes inside a duck decoy, so they continue to hunt with him season after season. Tom and his wife Tina both have young Labs at the moment, and there's always an abundance of dogs around the Dokken compound.

"Owning a new puppy is the mark of a new beginning and makes me look forward to teaching and watching a beginner turn into a true hunting partner," Dokken said.

John Gordon probably treats his dogs better than people, which is dang hard to do, because the Banded/Avery PR man is about the nicest guy you'll ever meet. A passionate snow goose hunter, John loves to shoot greenheads and quail … well, honestly anything with feathers or fur. But, he wants to do it with a dog by his side, which is no problem since he owns a Lab, Chessie, German shorthair, and a new golden retriever.

"I never planned on having so many dogs, but I'm not unhappy that I do," Gordon said. "And I love the diverse breeds; they all have distinct personalities. I'm a dog man to the core. I don't feel right without them."

Mark Atwater is a renowned photographer of gun dogs. He also owns a prestigious golden retriever, GRHRCH (6) Runs Creek's Be Ready for Yeti MH MNR QAA. The (6) means Yeti has passed the UKC's Hunting Retriever Champion Grand six times. One more passing score in a Master National event, and he qualifies for the hall of fame. The Atwater's have a total of five goldens, ranging from just over a year old to seven.

"Knowing the potential of a pup based on their ancestry or owning/being around great dogs and realizing the potential of the progeny and then molding that hard-wired or built-in talent into a great working and companion dog is an unmatched experience," Atwater said. "Plus, puppy breath is wildly addictive." 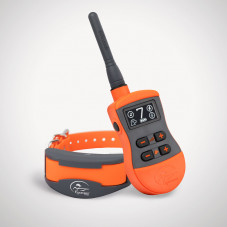